As I mentioned in my previous update/news article, this dev log is quite large compared to  previous ones. Its so big that I decided to split it into multiple parts, so as not to drop a massive wall on text on everyone. Doing it this way also helps me organize everything for my own benefit and allows me to finish each part off for early access more smoothly.

The main reason I couldn’t post logs as quickly as before was that it was more useful to work on everything at once instead of completing one smaller thing at a time and updating. I could get away with that earlier in development when the code was simpler and not as connected together.

The first part of this dev log will deal specifically with colonies, resources and the freight/cargo system. All three parts are linked heavily together and depend on one another. 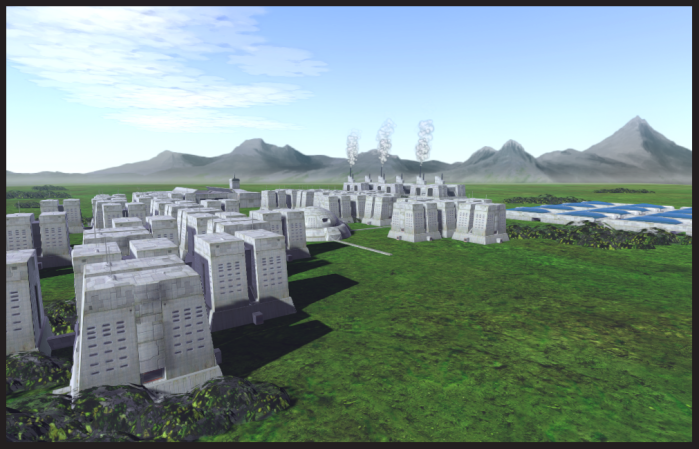 (Do note that I will add more detail into surface views, but first I want to complete more of the game and see how it performs along with everything else. That way I won’t have to down scale.)

First thing to mention about colonies is mostly visual. The surface view has been returned to the semi 3d view I had used earlier from the purely 2d view. It turned out the semi 3d fixed camera for surfaces was the best option. Its much easier and faster to work on than the pure 2d method. Counter intuitive I know, but that’s just how it worked out in this specific case. Also, I already had 3d assets ready for it and they only needed a little sprucing up. Its a good thing I had them backed up, you never know when you might need them.

Other than that the surface view is also linked to the outside of the planet now. For example other planets that you are near can show up in the horizon, if the atmosphere or lack there of allows it.

(Please note the above image is from a slightly older build, hence the different UI text. These UI elements have since been made more clear as visible in the other screen shots below).

As for the colonies themselves, I made outposts possible to be built on planets while differentiating them from normal colonies. These outposts essentially use the colony functionality but are too small to be counted as one. For example, they do not grow in population naturally. Outposts can serve as mining, military or science bases, or simply to store your stuff.

Other smaller changes/additions to colonies:

-Populations are now split per species, each with its own population down to the last person.
-Crew for ships are “made” via the academy. Each academy gives a max of certain amount of crew at a time. This also depends on population.

Resources come in multiple forms, even population IE people, are considered a resource . Even ships are technically the same and can be stored on planets or in the cargo holds of other ships so long as you have space. The other important feature is that certain resources can be combined, aka manufactured into other resources. These are typically minerals found on planets.

Manufacturing is an important aspect of resource management, though its automated and mostly controlled by the ai of the colony. Resources on planets are refined/turned into manufactured products that are then required to build your ships and other important things.

The basic functionality that is used for transferring cargo, IE the resources mentioned above to and from ships and colonies has been completed. The same functionality will later be used for trade, aka freight lanes.

As an example using freight, when colonizing, the fleet fills up with colonists from the source planet before heading off to colonize a target planet. You can pick how many colonists you want before the transfer begins. It also takes a certain amount of time depending on the tech of the freighters or shuttles at the colonies and or fleets disposal.

Essentially you can move around whatever ever you want between ships and planets if they fit in the cargo.

Some minor but related UI updates and the conclusion:

-Reorganized and completed more of the UI related to colonies.
-Split the colony/planet UI window as can be seen in most of the colony screen shots.
-Freight window to go with the freight functionality, mostly complete.

I’ll be honest, the UI is one of the most troublesome and annoying parts to work on. Good thing I left most of it until later when more of the other elements of the game were completed, otherwise a lot of time would have been wasted.

Overall, a lot of progress has been achieved even though it was a bit of struggle as the code became more complicated as I completed more of game. However its more complicated in a good way, more options for the player, more meat for the procedural generators.

Part 2 up next and it will deal with my personal favorite section of the game, ships and the rpg element.

One last thing, if you want to support development please check the funding page here: https://starzeal4x.com/funding/ or you can use the paypal widget on the upper right hand side of this page. Any support will be greatly appreciated. Thank you.

View all posts by thilaksha2

Support the development of Star Zeal. Check the Support & Funding page for more details. Thank you.